The mountain launches its food challenge:
the top three of the Lagazuoi WIMA2021 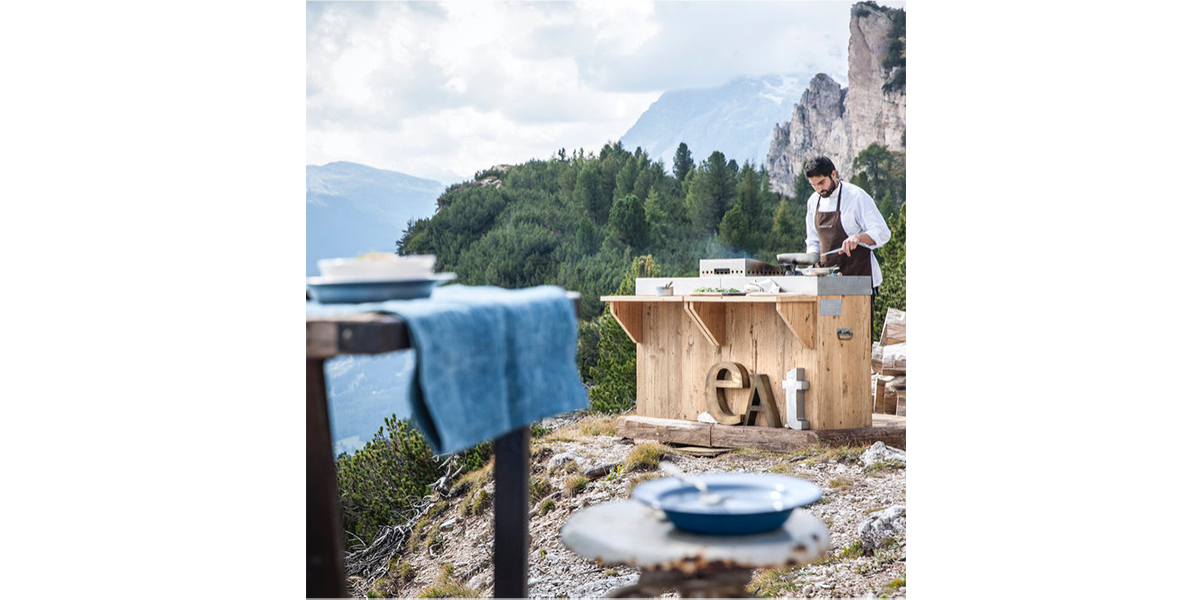 a starred restaurant "hidden" in a former barn that prevents food waste;
a cheesemaker who picks wild berries and herbs in the wood and uses them to refine his innovative cheeses;
a distillation master who makes never-before-seen elixirs:
these are the stories of the winners in the “Mountain Gastronomy Industry” category of the aweard conceived by Lagazuoi EXPO Dolomiti, an exhibition pole located at 2,778 meters above sea level between Cortina and the Val Badia.

The second edition of the Lagazuoi Winning Ideas Mountain Awards focused on talent, innovation and sustainable tourism related with the mountains. This year the award has also included best practice and new lifestyles which revolve around food, farming and cultivation.

The first place was won by SanBrite, a restaurant situated in the valley of Cortina, followed by the Eggemoa cheese factory and the distillery of the Dolomites Zu Plun, both situated in South Tyrol. The award ceremony and the exhibition of the winning projects will be held at the Lagazuoi EXPO Dolomiti as soon as it will be possible to attend public events again.

Cortina d'Ampezzo, February 10th 2021_The gastronomy of the future? Regenerative and with cycle management. Like that of the SanBrite in Cortina d'Ampezzo, winner of the Lagazuoi Winning Ideas Mountain Awards 2021. The second edition of the award, an original curatorial project by Lagazuoi EXPO Dolomiti, this year has introduced the Mountain Gastronomy Industry category. On the winners’ podium got also two South Tyrolean companies, the Eggemoa cheese factory from Valle dei Molini in the Ahrntal and Zu Plun, a distillery in the Dolomites.
The winner was determined by the jury made up of  the students of the degree course in Gastronomic Sciences at the University of Parma under the supervision of the lecturer Prof. Cristina Mora. Some of the participating projects were selected by highly qualified experts: Maddalena Fossati Dondero, director of La Cucina Italiana, Norbert Niederkofler, chef-de-cuisine, three Michelin-stars at the St. Hubertus restaurant in San Cassiano, Massimiliano Tonelli, managing editor of Gambero Rosso and Artribune.

These projects will be officially presented together with the winners of the other three competing categories, namely Mountain clothing and equipment, Digital innovation & apps, Sustainable and innovative mountain tourism. As soon as the epidemic situation makes it possible, the public will admire them at the Lagazuoi EXPO Dolomiti, next to the top station of the Lagazuoi cable car, between Cortina and the Val Badia, amid the stunning scenery that embraces a gallery and one of Europe’s highest cultural centres.

These three mountain gastronomy projects represent exactly what the awards aim to bring to the fore: the ability of the mountains to be ambassadors for their values, which differ significantly from those of the lowland and the cities. In an extreme, largely wild environment, the coexistence of nature and people continues to shape culture and inspire innovations: Here, topics such as the mountain gastronomy become groundbreaking generators of innovations that can be successfully exported elsewhere.

SanBrite_ Restaurants often work hard to find and develop their own agricultural identity. For the SanBrite from Cortina it was exactly the opposite: from the stables to the stars as the agricultural business has evolved into kitchen, conquering critics and being awarded a Michelin star in 2020. The SanBrite restaurant - in the Ladin language of the Ampezzo region the name is made up of "san"= healthy and "brite" = alp - was opened in 2017 with a very specific proposition.
The former barn of the Gaspari family, with a view of the Tofane group, houses an innovative concept for regenerative cuisine with circular management, in symbiosis with their cheese dairy and wine and sausage cellars. In their little house in the wood,  furnished with designer pieces and antiques, Riccardo Gaspari and Ludovica Rubbini offer local products, roots and tuber vegetables, most of them self-produced, and put all the waste back into circulation as fertilizer or animal feed.

Eggemoa_This cheese factory opened twenty years ago in the 1,300 meter high Valle dei Molini. However, only in recent years, its products came into the spotlight and now they are increasingly earning awards. The merit is due to the passion and enthusiasm of the young cheesemaker and cheese taster Michael Steiner. You can often meet him in the wood, gathering spruce bark, larch needles and other valuable ingredients for his work. From the raw milk of his grazing cows, he produces hand-brushed soft cheeses and refines them. In this way he produces for example Carbo, matured in wood ash, Silva, matured in spruce bark, Herbarius, with fenugreek aroma, Floralpina, with thyme and juniper berries, Larix, with larch resin -aroma, Steiner, today a classic, winner of the Italian Cheese Award 2016, and many others cheeses.

Zu Plun_We are in the alchemical laboratory of the distillation master Florian Rabanser, on a farm on the landholdings of Hauenstein Castle, once the property of the poet Oswald von Wolkenstein, bought and renovated by Florian. Today internationally famous gin, rum, liquors and grappas with mountain ingredients are produced here, at 1000 meters above sea level. Florian Rabanser was a cook in his "previous life": He has retained his refined taste palate that he needs now for his research work to always create new combinations. The results are the Dol Gin, dedicated to the botanical plants of the Dolomites, fruit distillates and spirits with wild herbs and berries, grappas made by distilling the high-quality pomace of small winemakers as well as grappa barricata and rum aged in oak barrels.